See? You can fill Soldier Field without the Bears.

The Chicago Bears have dropped hints of a possible move from Soldier Field to the suburbs for weeks. They are one step closer with the announcement that they intended to purchase the Arlington International Racetrack in Arlington Heights.

Let’s make one thing clear: the city of Chicago losing the Bears to the suburbs is more desirable than spending tax dollars attempting to appease the billionaire owners of a consistently underwhelming football team. The Bears’ bullying tactics should anger the city’s taxpayers. After all, any arrangement to satisfy the Bears owners will undoubtedly either come with a tax increase or at the expense of city services.

It’s true that Soldier Field provides employment opportunities – and those opportunities will continue even if the Bears bolted for the suburbs. After all, the Bears only host a grand total of eight home games a year. The economic impact for the city is minuscule. The costs to taxpayers to fund a stadium expansion or improvements would not be worth bearing.

Meanwhile, Soldier Field will continue as one of the nation’s premier locations for outdoor concerts. In addition, the Chicago Fire – who recently relocated from the suburbs – will continue to play at the stadium. Oh, and did anyone else notice that Notre Dame just played Wisconsin here? The Fighting Irish love Soldier Field even if the Bears do not. Bottom line: there are plenty of potential uses for the stadium.

If the Bears do break their lease early – which is set to expire in 2033 – the city could pocket the $84 million lease termination or use it to fund capital improvements at Soldier Field. Again, either of these scenarios is better than using tax money to fund a stadium expansion or dome.

There’s even the possibility of an expansion team. Years ago, former mayor Richard M. Daley floated the idea of attracting a second NFL team to Chicago. Maybe such a team – with more competent owners, management, and coaches – might even be capable of winning a Super Bowl.

Both New York and Los Angeles have two NFL teams. As the third-largest market in the nation, Chicago could certainly support a second team. If the city combined the Bears’ broken lease payment with private investment, you could conceivably make major improvements to Soldier Field without taxpayers spending a dime.

With all of these factors in mind, the city has more leverage than it realizes. Call their bluff. Let the Bears walk. If they do – and Arlington Heights taxpayers are gullible enough to fund a new multi-billion-dollar stadium – Chicago will be just fine. 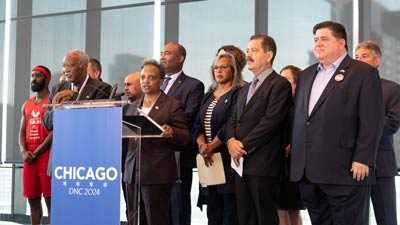